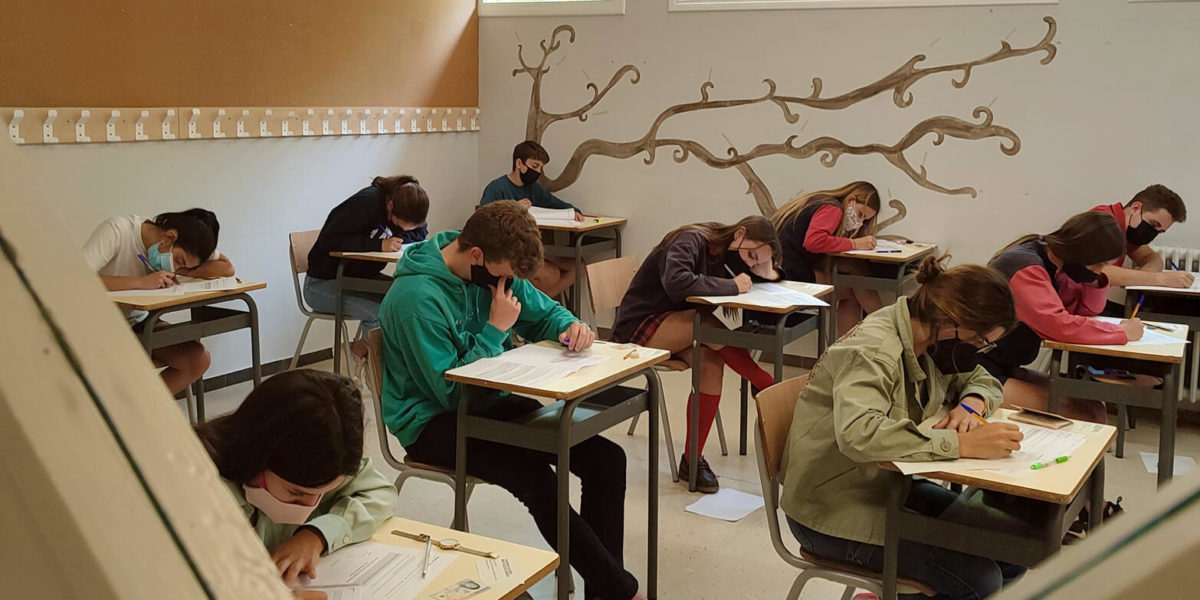 The Secondary Education (ESO) stage includes students between the ages of 12 and 16. This is a time of social, psychological, and environmental changes for both boys and girls.

At our school, we continue developing the various competences of our students in different fields of knowledge, working in a transversal way, so that they develop their own criteria, and become committed, critical, empathetic and, ultimately, good people.

The personalized monitoring of our students is one of the pillars of the school and, in a stage of profound changes as is the case in ESO, this aspect takes on a special relevance. That is why we give great importance to the figure of the tutor, who is the one who will ensure the proper development of the students, both personally and academically. The tutor is also the person of reference for the family as they are the link between home and school.

We reduce the ratios of the groups by creating, if necessary, extra lines, in order to work in a closer and more personalized way.

Surrounded by nature and with open spaces, the students can take advantage of this unique environment to develop leisure and recreational activities, as well as those related to learning.

We take the classroom outside to create experiential spaces that stimulate the curiosity, motivation and creativity of the students.

It is outdoors where we also develop cross-sectional and interlevel activities and proposals such as the school garden project.

We look further and take advantage of the proximity of the Natural Park to work on subjects such as biology. This space offers infinite possibilities for experiences that make learning meaningful.

We also carry out our Physical Education sessions in these outdoor spaces.

We believe that education in values is a fundamental pillar of our students’ passage through school.

Every morning, we start the day by sharing a running time with the classmates and the tutor of each class group. It is a time of forging relationships, having a conversation with equals and promoting group cohesion.

The students take part and are involved in various solidarity campaigns and community service actions such as: food collection, Let’s Clean Up Europe, TV3 Marathon projects, etc. These actions are promoted by the school, and take place at different times throughout the school year.

Foreign languages play a fundamental role in our educational project, with the aim that throughout the ESO stage the students can express themselves in all of the languages they know.

English is the vehicular language in different subjects, going beyond the officially established ones, such as TOV, Science, Technology, Programming, etc.

On the other hand, all students study a second foreign language, which can either be French or German.

We also prepare students at school so that, if they want, they can take the official Cambridge exams: First Certificate of English (FCE) or Cambridge Advanced of English (CAE).

We’d also like to highlight the Mini-stay School Integration Week project in Primary: a voluntary stay abroad, lasting a week, where the students immerse themselves in the English culture through accommodation with families and attending a British school.

We believe in meaningful learning that is developed through diverse proposals related to educational environments in small groups.

Some of the proposals we carry out are:

We have different thematic classrooms where we can develop various proposals related to educational areas. We have:

During the course, various talks are held by professionals and experts from very different fields, who, with their vision and experience, complement the content worked on in the classroom.